THE EARLY STORY OF SARAWAK

James Brooke born in India in 1803 had already imbibed the lure of the East, the then truly mysterious, long before he embarked on the adventure, which made his name and founded a dynasty. Unusually, Brooke’s father, a judge of the High Court in Benares and an official of the British East India Company, did not follow expatriate custom and send his children home to the healthier climes of England to escape the many pestilences endemic in Asia at that time. This was how James Brooke spent his first twelve years in Benares, soaking up sounds, sights and smells of the East. By the time he was sent to school in England to be educated, in 1815, he was more eastern than occidental in his outlook and never really settled in the sedate surroundings of the green and pleasant land. Brooke craved the chance to achieve some sort of exotic exploit, which life in England and even the army of the East India Company, which he joined in 1819, could never have offered.

Brooke knew where to seek adventure, in the wild, untamed islands of the East Indies, but it was not until 1835 when his father died and he inherited the then colossal sum of £30,000 that he was able to implement his plans.

Brooke purchased a yacht, the Royalist, which was heavily armed with six-pounder artillery, several other guns and a quantity of small arms. Wisely, though, he was not in a hurry to get to the East Indies. In 1836 and 1837, Brooke took Royalist on a rehearsal cruise in the Mediterranean where, like most tourists of the time, he plundered ancient statues and other portable items of archaeological interest.

Returning to England, he spent the next eighteen months studying navigation and the geography of the East Indies. Then, he decided his precise destination: the island of Borneo where he hoped to discover the then unknown Lake Kini Ballu. However, European maps of remote regions like Borneo were full of empty spaces, indicating unexplored and therefore unconquered territory and Brooke’s intentions were not just scientific and exploratory: he meant to conquer and colonize and do some empire building of his own.

His quest began in earnest in December 1838 when he set sail in Royalist bound for Singapore. There he planned to spend two months. Brooke arrived at the beginning of June 1839. Twenty years after Stamford Raffles had claimed it for Britain, Singapore had grown into a substantial port handling merchandise from many parts of south east Asia. It was also the entrepot for travelers’ tales and sailors’ gossip and by this means, Brooke learned about Sarawak, a small state in north west Borneo where the Rajah, Muda Hussein, was said to be friendly to foreigners. A cooperative native ruler was essential to Brooke’s plans and though his original itinerary had not included Sarawak, he resolved to sail there and meet its benign Rajah.

Brooke left Singapore in Royalist on 27 July 1839 and headed for Borneo and Sarawak, which he reached in two weeks. He informed the Rajah of his arrival and was rewarded in style. Muda Hussein sent Prince Aladin, his brother, his own secretary and an officer of his personal guard to meet Brooke and guide Royalist past the thick forests and crocodile infested mud banks of the Sarawak River to his capital, Kuching. When he arrived, Muda Hussein greeted Brooke in full state, dressed in ceremonial brocade uniform and surrounded by princes of the royal blood in a reception hall decorated with silks, spears and banners.

The barbaric splendour of the scene deeply impressed James Brooke and later, the Rajah was given a personal tour of Royalist. Gifts were exchanged, guns were fired in salute and the utmost politeness, which Brooke realized was important to the natives, was scrupulously observed.

The whole performance, especially on Brooke’s side was designed to build an atmosphere of trust. Europeans, notably the Dutch who had long been active in the East Indies, had often disgraced themselves by their arrogance and frequent brutalities, and Brooke was out to prove he was the exception. He succeeded, for Rajah Muda Hussein became only too anxious to discuss trading prospects with Brooke and more or less allowed him free rein in Sarawak to explore, discover and mix freely with his subjects. A genuine friendship grew up between the two men and the Rajah came to realize that Brooke was just the champion he needed to rid Sarawak of an ongoing crisis: the disruption caused by pirates and rebels who were being egged on by a rival ruler, the Sultan of Sambas. The Sultan, in his turn, was being encouraged by the Dutch.

However, Muda Hussein and his advisors had a curiously indolent attitude to their problem. They wanted to be rid of the pirates, but were not prepared to make a major effort to do so. The Rajah induced small bands of pirates to desert to him, but this did not substantially weaken the pirates. Brooke suspected, with good reason, that some of the royal princes, most notably a certain Prince Makota, were playing racketeer and creaming profits off the pirate’s activities. In other words, they had a vested interest in prolonging the crisis.

In this context, James Brooke was not a welcome newcomer to the princes. Once he took charge, the picture changed dramatically. The pirate stronghold was a series of forts along the Sarawak River, the most important of which was a stockaded base at Balidah. Brooke, whose own army consisted of the 13 officers from Royalist, mounted a battery of guns, bombarded Balidah for an hour and virtually demolished the wood-built structure. This was followed by a general assault, in which Brooke charged across paddy fields at the head of his forces, a tactic, which so alarmed the enemy that they scattered and vanished into the forests.

Winkling them out took some time, and a war of slow attrition ensued. The pirates grew exhausted and at last, after several months, they offered to surrender. Brook’s reward was the most magnificent possible. In a letter, which he signed on 24 September 1841, Rajah Muda Hussein abdicated and handed Sarawak to James Brooke, together with its dependencies and revenues.

Peace and a quiet life did not, at first go with it. The pirates Brooke had vanquished were by no means the only renegades able to make serious trouble, and in fighting among the Sarawak princes and chieftains caused a bloody massacre of the families of Muda Hussein and his brothers. Faced with capture by his enemies, Muda Hussein blew his brains out.

Brooke was heartbroken and the violent, ignominious death of his friend embittered him for the rest of his life. It was not the end of troubles – Sarawak was too barbaric for that – but the Brooke dynasty of White Rajahs proved to be securely founded. After James Brooke died in 1868, his nephew Charles Antoni Johnson succeeded him as Rajah and took his uncle’s family name, to become Sir Charles Brooke. In an almost fifty year reign, Charles extended his power over almost the whole of northern Borneo and was succeeded in his turn by his son Sir Charles Vyner Brooke, who was the last Rajah.

All three White Rajahs appeared on the stamps of Sarawak, the first of which was issued in 1869, and in fact featured only their portraits until the territory, ceded to Britain in 1946, became a crown colony. Charles Vyner Brooke had been dethroned during the Japanese occupation of Sarawak in the Second World War, but on returning to power discovered the territory was so decimated that only national resources could restore it.

Nevertheless, the Brookes made a fine philatelic exit in the four stamps of the centenary set (SG 146/9) issued, five years late because of the war, in 1946. All three were depicted in the design, with Sir Charles Vyner Brooke in the centre and his predecessors on either side of him. James Brooke appeared in the portrait of him in 1847 by Sir Charles Grant, looking every inch the swashbuckling adventurer, which is just what he was. 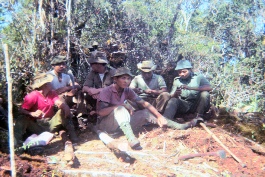 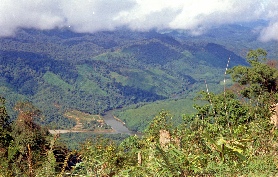